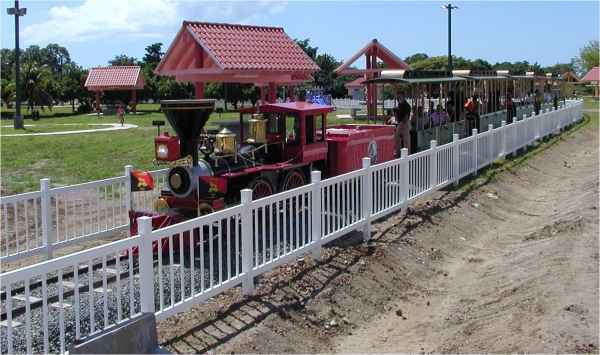 Cromar White worked on a project sponsored by the Mayor of Ponce on the southern Caribbean coast of Puerto Rico, which is about 120Km from the capital, San Juan.

The Mayor obtained regional funding for this ambitious project at the Julio E Monagas park which has been doubled in size, added two new children’s water attractions, plus numerous picnic tables with seating and sun roofs, barbeques and a 24″ gauge railway having four stations and automated road crossing drop gate signals. The track is 5300 ft (1616M) long, weaving it’s way through the existing mature park and into the newly landscaped extension with a number of interesting elevation and direction changes. The railway is already making it’s mark as a local and regional “must visit” destination.

When the park was opened in October 2008, 18,000 visitors passed through the park, on the first day. 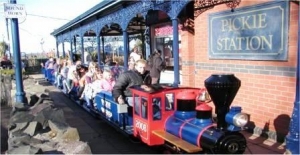 In 2007 Cromar White were approached by the North Down Borough Council (NDBC) in Northern Ireland to re-furbish the once proud Pickie Puffer track, locomotive and rolling stock, within Pickie Park, Bangor

Following consultation with Cromar White, the council decided to refurbish the track in 2007 and look to refurbish/replace the rolling stock in 2008.

The track had been prey to vandalism, and NDBC wanted the new track to be as vandal proof as possible.

Following the track refurbishment, Cromar White leased NDBC a locomotive to see them through the Summer season.

North Down Borough Council this week officially unveiled the new and improved Pickie Puffer train at Pickie Family Fun Park in Bangor. The new train looks and sounds like the original Puffer (which had operated at the Park since it opened) but is a more modern design and now includes a wheelchair accessible coach.

The new train and coaches were supplied by Cromar White Railways in Wales.

Commenting on the new addition to the Park’s facilities Mayor of North Down, Councillor Dr Stephen Farry MLA, said: “The Pickie Puffer has always been a popular attraction at Pickie Family Fun Park but the original train, purchased by Council in 1992, had suffered significant wear and tear. The track was also in need of repair. Last year, for health and safety as well as aesthetic reasons, Council commissioned work on the track and decided to replace the train and the new Pickie Puffer arrived with us shortly before Easter. With the benefit of a wheelchair accessible coach we are confident it will be a great addition to the 2008 Summer Season.”

Since the launch in March 2008, Pickie Puffer has exceeded all expectations and transported well in excess of 2,000 people a week during the peak season.

Following the success of the track refurbishment in 2007, Cromar White were invited to tender for the replacement of the Pickie Puffer locomotive and coaches which had to include a disabled coach. The project needed to be installed and running for the well publicised launch on March 17th 2008, St Patricks Day.

The project for the North Down County Council was delivered on time and running on March 17th.

Further work as been carried out during the 2011/2012 refurbishment of Pickie Fun Park this includes addition of roofs to the sit astride coaches and an automatic crossing point for public access to the childrens play area.

By continuing to browse the site, you are agreeing to our use of cookies.

We may request cookies to be set on your device. We use cookies to let us know when you visit our websites, how you interact with us, to enrich your user experience, and to customize your relationship with our website.

Click on the different category headings to find out more. You can also change some of your preferences. Note that blocking some types of cookies may impact your experience on our websites and the services we are able to offer.

These cookies are strictly necessary to provide you with services available through our website and to use some of its features.

Because these cookies are strictly necessary to deliver the website, refuseing them will have impact how our site functions. You always can block or delete cookies by changing your browser settings and force blocking all cookies on this website. But this will always prompt you to accept/refuse cookies when revisiting our site.

We fully respect if you want to refuse cookies but to avoid asking you again and again kindly allow us to store a cookie for that. You are free to opt out any time or opt in for other cookies to get a better experience. If you refuse cookies we will remove all set cookies in our domain.

We provide you with a list of stored cookies on your computer in our domain so you can check what we stored. Due to security reasons we are not able to show or modify cookies from other domains. You can check these in your browser security settings.

These cookies collect information that is used either in aggregate form to help us understand how our website is being used or how effective our marketing campaigns are, or to help us customize our website and application for you in order to enhance your experience.

If you do not want that we track your visit to our site you can disable tracking in your browser here:

We also use different external services like Google Webfonts, Google Maps, and external Video providers. Since these providers may collect personal data like your IP address we allow you to block them here. Please be aware that this might heavily reduce the functionality and appearance of our site. Changes will take effect once you reload the page.

The following cookies are also needed - You can choose if you want to allow them: